Can’t get enough of Merely.

Naysayers go on about how their ice cream isn’t the smooth and creamy sort. I don’t think the ice cream is icy (I’ve seen tiny, water, ice crystals in ice cream before and Merely most certainly does not have that); I think it’s just not airy enough. But personally I’m fine with the texture of all their ice creams, and even their sorbets. 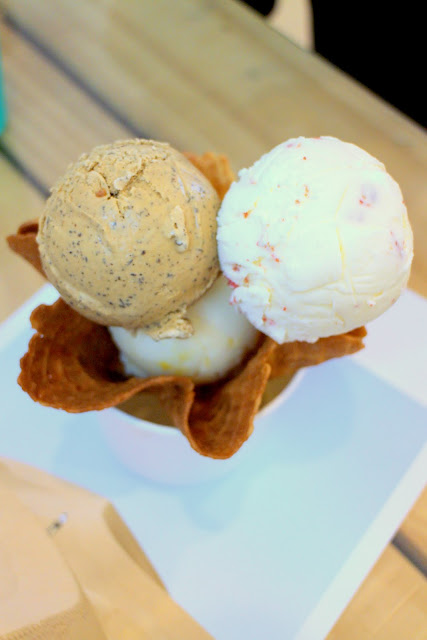 Having not had Merely for awhile, I’ve forgotten how good their ice cream is. Their earl grey ice cream, a combination of an earl grey ice cream base and a liberal amount of earl grey tea dust, is one of my favourite interpretations of tea in dessert because it’s strong in flavour and not saccharine sweet. Usually I can’t stand red velvet, but for Merely’s red velvet ice cream, the cream cheese ice cream base is mildly sweetened, allowing the tangy cream cheese flavour to come through. I can’t deny that I look forward to every red velvet crumb too, even if it’s just a mild chocolate cake coloured red. 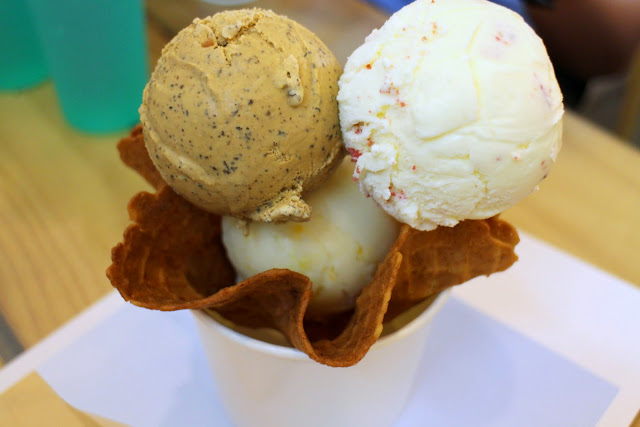 Right at the bottom is their yuzu citron tea, a refreshing sorbet with tiny yuzu bits. Sorbets can be so sickly sweet but not at Merely! Only fresh, unadulterated flavours found here.

Other flavours that I like are their Gula Pandan, and Nutty Beer. I’ve tried most of their flavours (check out my other visits, here and here) except for a couple, and I really want to have their Breakfast Cereal (It sounds very promising. I’ve never had Milkbar’s Cereal softserve so I guess this is the closest thing I’ll get in SG).

Please have your scoops in their crunchy, eggy, waffle bowl. Don’t let any melted ice cream go to waste~