The friends got wind of a new pop-up cafe called Dînette that was going to be held at Three Years in a Balloon. L’Éclair, or The Little Yellow Apron (it seems like they go by both names?) was inviting reservations for a special tea-time menu. We were all in for exciting, and adventurous flavours so the decision was quickly made to head down last week. 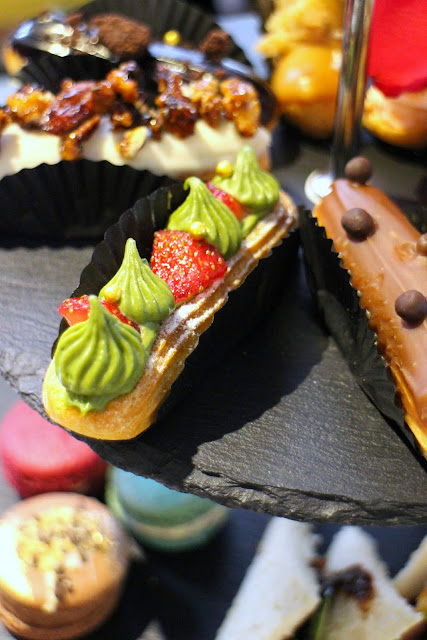 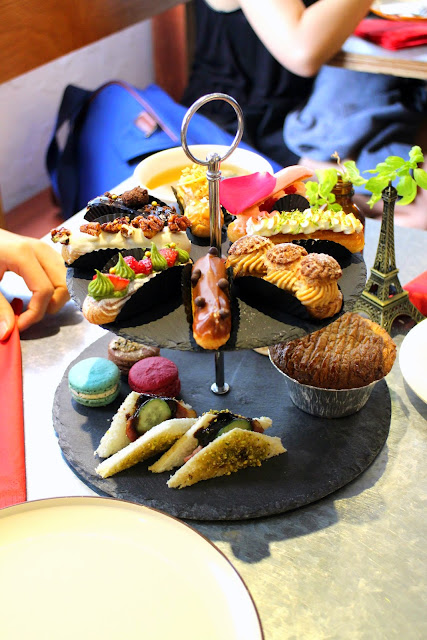 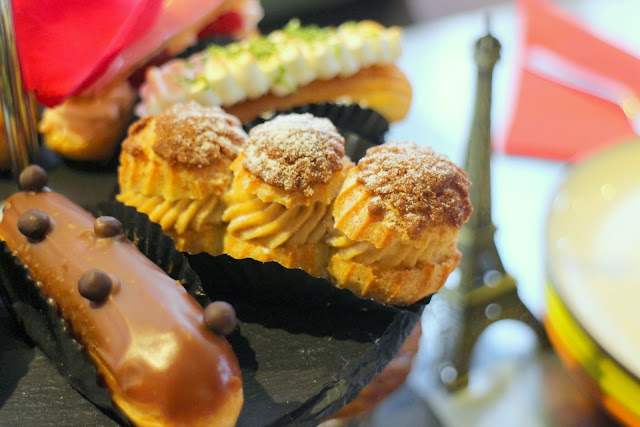 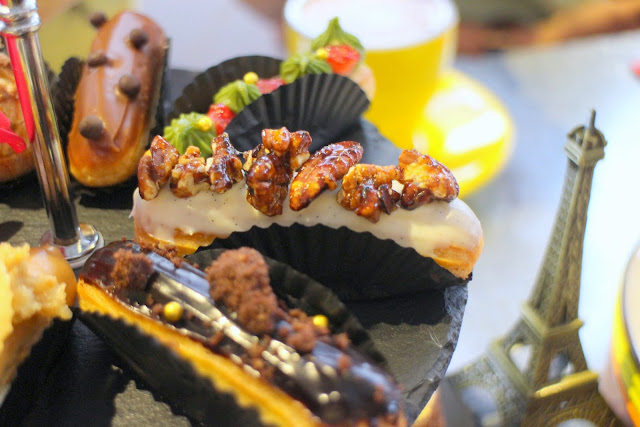 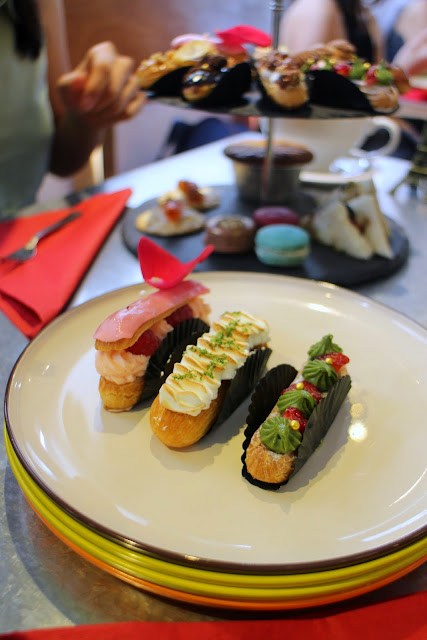 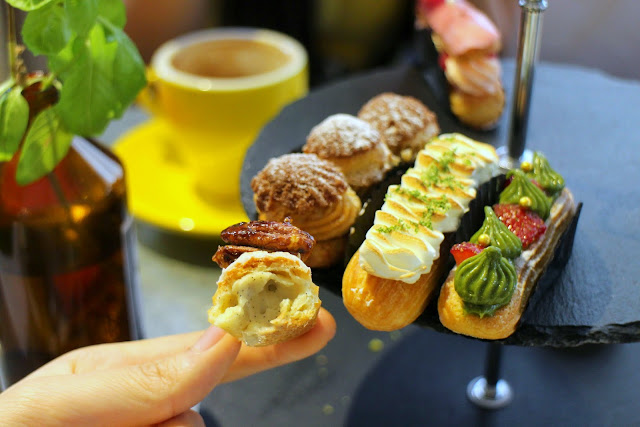 The flavour combinations for the eclairs were very interesting, and well thought out. I could tell that lots of effort was put into each and every eclair. I mean, we are talking about 2-3 components per eclair. For 8 flavours, that would add up to more than 17 components :O

If I were to rank the choices, it would be as follows:

1. Lychee Raspberry Rose: PH’s ispahan combination. Delightfully refreshing and perfumed by the floral notes. They did a fabulous job with the presentation too.

3. Salted Caramel: The salty caramel was actually quite balanced. The caramel wasn’t overly burnt either.

5. Hazelnut: Thank goodness they didn’t try the done-to-death milk chocolate and hazelnut (aka ferrero rocher). Not that I dislike that combination, but I do enjoy the pure, unadulterated flavour of hazelnut. I was hoping for a crunchy top but it wasn’t. That would have made it more perfect.

5. Green Tea & Strawberry: It was nice, but not as great as the above few for me. I know the friends might beg to differ though.

6. Banana: I actually liked the banana cream (think tokyo banana). But bananas have never been my favourite flavour. 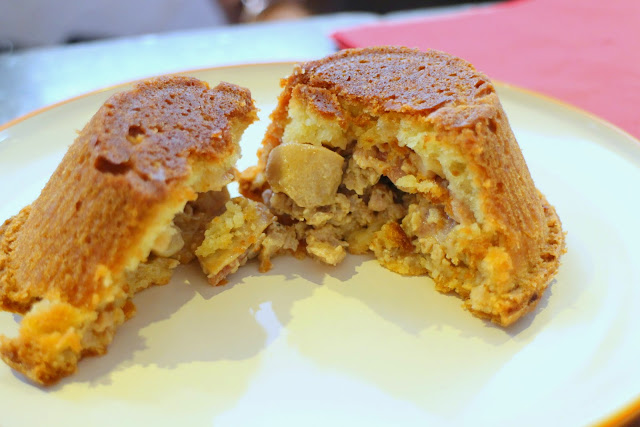 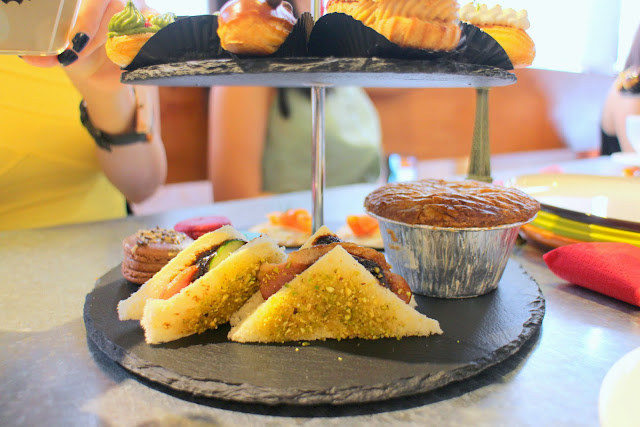 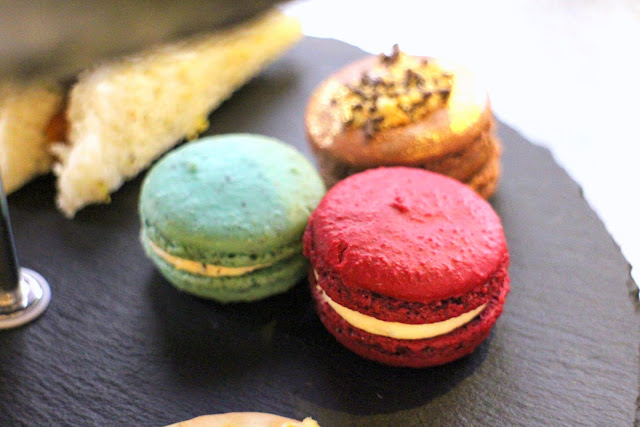 The macarons from Shiberty were disappointingly chewy and the sweetness was one-dimensional.

But the basque chicken bacon pie was fabulous. The sweet-savoury filling was v more-ish, and I was most impressed by the pie itself. Never had something like that before! Came home and did a bit of research as to what a “basque pie” is. I realised that I’ve had sweet versions of it in Europe (which were honestly, quite forgettable), but here the sweet pie crust was nicely browned to a crisp, and the crumb was soft and buttery, not unlike good pound cake.

Overall, the experience was very fun. The tea set (what you see above + two drinks) is priced at $50, but you can also find the eclairs and pie at various events that L’eclair will be going for. Check them out here.