It won’t be exaggerating to say that Fatty Cheong‘s roasts (#01-120), and Jin Jin Desserts‘ Chendol (#01-20) are enough to convince me to make a special trip down to ABC Brickworks. 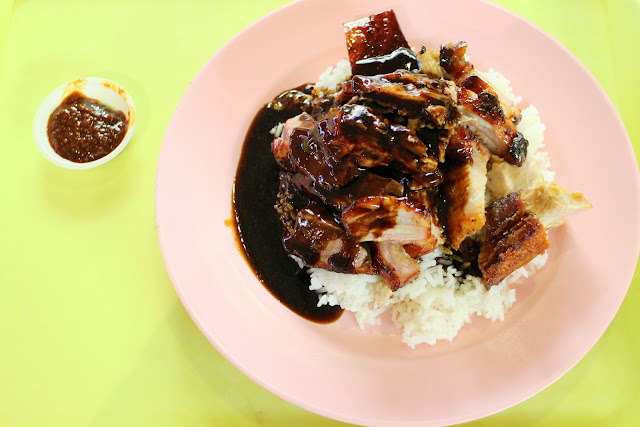 Fatty Cheong’s roast duck and char siew in particular are restaurant- quality, but sold from a humble and tight space in a very unassuming hawker centre.

What’s amazing is that they actually have a furnace to roast their meats at the stall itself. I was lucky to catch them flinging a whole string of pork into the small furnace. Cool stuff. 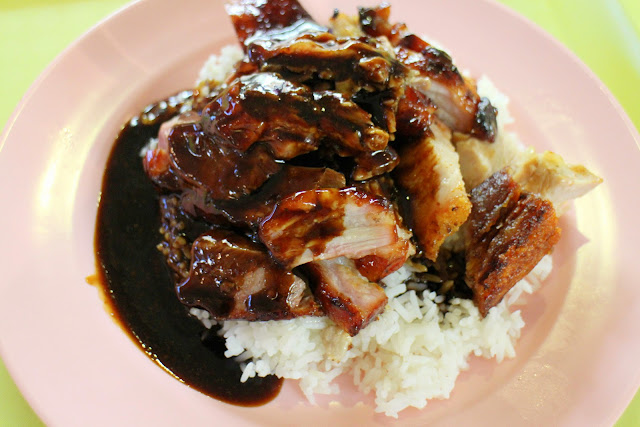 This plate of mixed roasts cost $7. I requested for arm-pit charsiew. There is honestly, no civilised way of saying this? I gave an awkward laugh, and asked for it in english- but my order got across so whatever!

I think the arm pit char siew was pretty special because the thin slivers of fat were evenly distributed to the meat (or is it the other way around? HAHA) resulting in melting, tender meat. But if you are the kind who removes the fat from char siew, sorry, that’s quite impossible for arm pit charsiew.

The Roast Duck was very memorable because of its tasty, moist meat, and crisp skin. This went so well with the sweet sauce that they generously douse the plate with. Usually the meat of roast duck is very stringy and dry but this stayed moist and juicy.

The siu yuk was not bad actually with its well seasoned and thick, crunchy crackling. But the other two roasts just outshone this one. 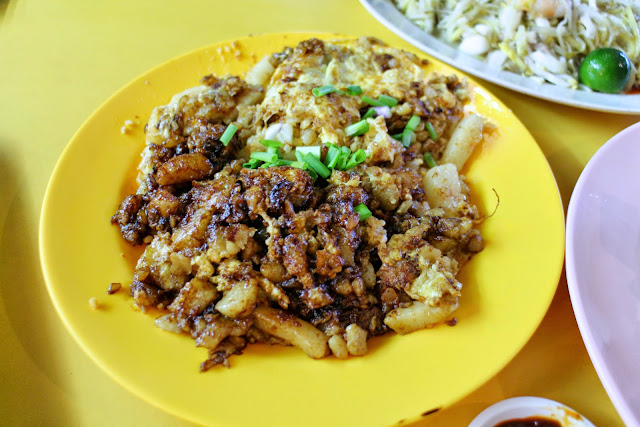 The friend managed to ask for half-half, black and white carrot cake from Tanglin (#01-130). This was surprisingly good. Not too dry, or wet, good seasoning all around for both, and of course, there were my favourite smokey-sweet, burnished brown egg bits for the black. 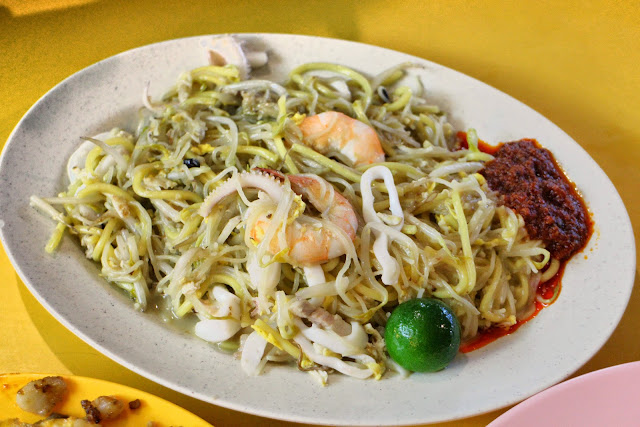 We got Hokkien Mee from a stall close to the carrot cake stall. This is not the famous one that is frequently blogged about. That one only opens at 3pm!

This Hokkien Mee was a wet version and a very decent rendition. I would have liked a stronger flavour from the prawn stock base but that said, this was tasty enough for us to polish off easily. 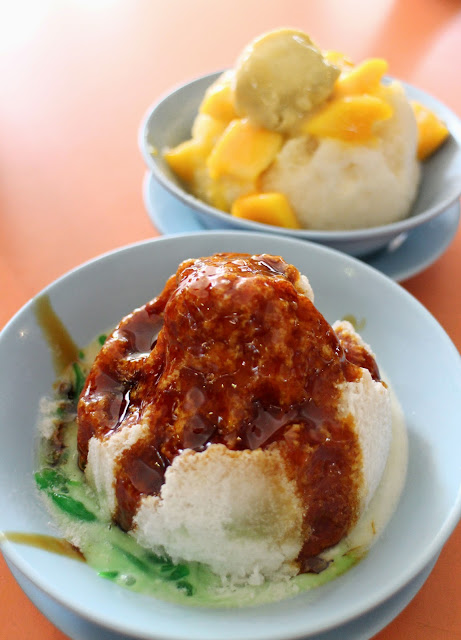 Anyway. Their Power Chendol is truly worth raving about. Chendol is a celebration of the coconut since the main ingredients are coconut milk, and gula malaka (or coconut palm sugar). Both of these ingredients shine in Jin Jin’s rendition.

Their gula melaka was all caramelly, and nutty, sweet but not toothachingly so because I always find that gula melaka has a sort of savoury element that makes it go beyond sugar-sweet. The ice was a bit gritty at first but afterawhile, it was just fine. Moral of the story: take more photos before you eat. 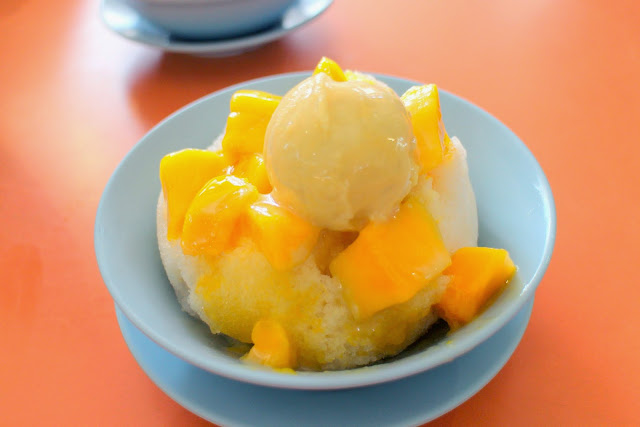 Equally worthy of mention is their Gangster Ice. That scoop of frozen durian was literally the  ice cream on the shaved ice. Its creaminess was nicely balanced by a refreshing medley of fresh mango, mango syrup and shaved ice. 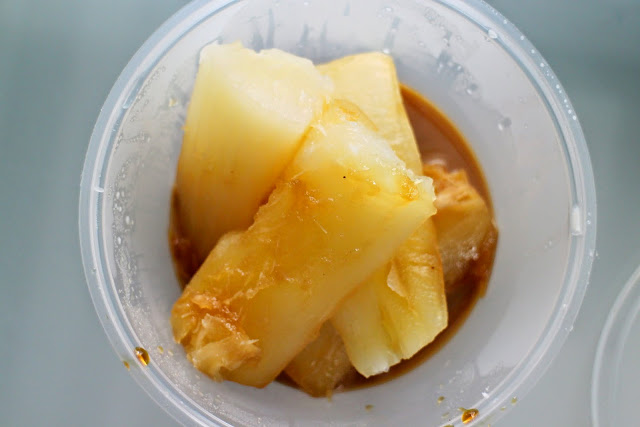 On Sundays, they do a traditional steamed tapioca with gula melaka and coconut cream. I was supposed to stop at one but that didn’t happen. Good for those who like things less sweet! 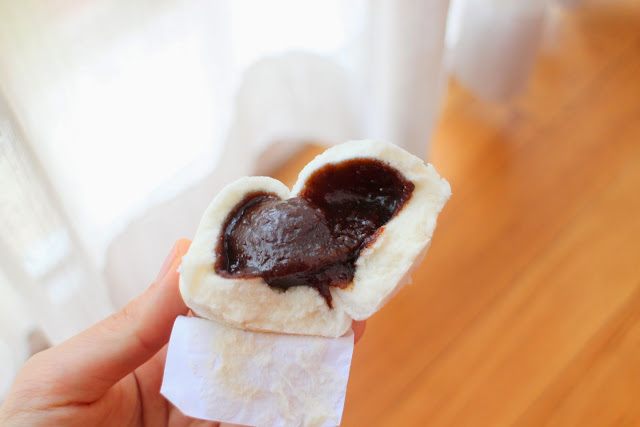 I also took away some small baos from Guang Ji Bao Zai (#01-135). They were handrolling fresh dough at the shop so I had to buy some just to try. The red bean bun was overflowing with its runny filling when torn apart but I thought the bao skin could have been less tough. It might be fluffier if you eat it freshly steamed at the shop.

A return is a must for wanton mee, western food, fishballs, and that elusive hokkien mee.