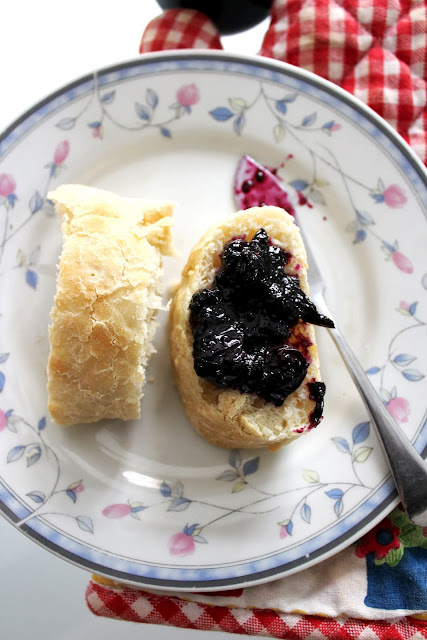 Spent the morning yesterday kneading dough and stirring my jam before work. I’m a little addicted to bread-making because I feel it relies more on estimation and experience rather than precise metrics like pastry. Makes it a little more interesting than simply just following a recipe. So when I embarked on an easy ciabatta recipe that required only olive oil, water, salt, bread flour and yeast, I only referred to the recipe for a rough estimate before making my own judgement wrt to the amount of flour added along the way. Ciabatta dough is supposed to be very wet so don’t be surprised if you can’t work with it properly. I found it impossible not to add more flour but experienced bread-making bloggers suggest otherwise. My bread didn’t have the thick chewy crust that I love of a ciabatta. And unfortunately for 2 out of my 3 loaves, I tried to pat them into prettier rectangles because my knife wasn’t sharp enough so it ruined them after slicing. I suspect this destroyed the beautiful aeration inside that I usually look for when eating ciabatta. It was still fluffy like normal toast (hence I refrained from calling it “ciabatta” in my title haha), but it missed those huge holes (due to fermentation) that I like to see! My third loaf which I didn’t have to shape turned out beautiful though. It looked exactly like the insides of a proper ciabatta I get commercially 😀

I won’t be providing the recipe that I used because I deviated quite a bit from it. But click here for the link to a recipe that I want to try! Wild Yeast is a great blog which is very serious about artisan-breadmaking at home I love it. Spent a good hour just reading the notes and research done in this blog. 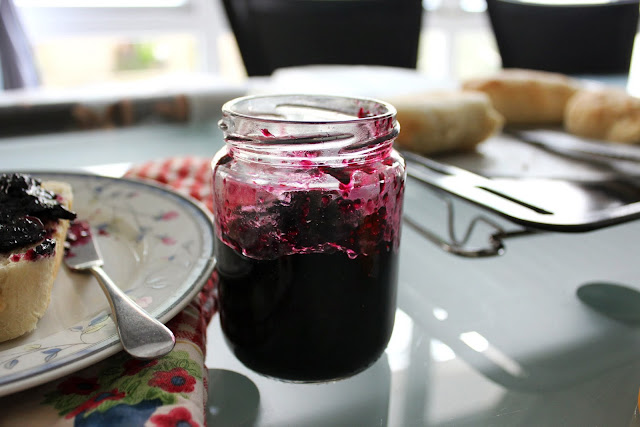 In between proofing my dough I also made a simple blueberry-lime jam. Had a leftover Australian lime from a previous baking session which was begging to be used so yes I dreamed up this combination. Didn’t use commercial pectin and whatever and bind the jam- relied on the natural pectin in the lime rind and also sugar. I was so happy that my jam could set into a ‘spreadable’ consistency since it still looked watery when I poured it out of the pan. I cooked and stirred for almost 20 minutes, occasionally jacking up the heat to bring the mixture to a rolling boil- not sure if this is correct or the most efficient way but haha, it worked! It took 2 punnets of blueberries and 1 huge Australian lime to make a small jar of jam. So the cost price is about…. 8 bucks? :O I’m planning to make strawberry-vanilla jam next with real Madagascan vanilla pods. I wonder how much that would cost haha.

I think the funniest part was when I sliced some bread and spread jam over it for my grandma. She thought the jam was store-bought and was instead fussing over the bread. But when she realised the jam was home-made too, her facial expression was priceless 😉