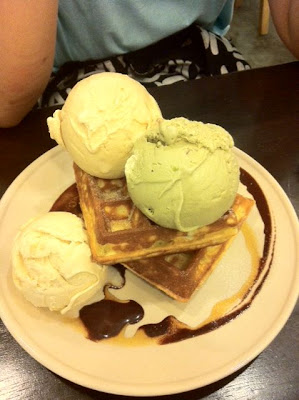 If you like your ice cream rich, super creamy and smooth, Creamier is for you. Overall I still prefer TP’s lighter creations that tend towards the gelato end of the scale but I must say Creamier’s Roasted Pistachio was so packed with flavour that our faces lit up when we tasted it. The ‘is this for real??’ kind of look. The amazement came partly because I know how hard it is to infuse the flavour of nuts into ice cream/ gelato. Before this my favourite renditions were those from Tom’s Palette and Alfero Gelato but Creamier’s was so much more flavourful with the addition of chopped up roasted pistachios for an extra crunch. 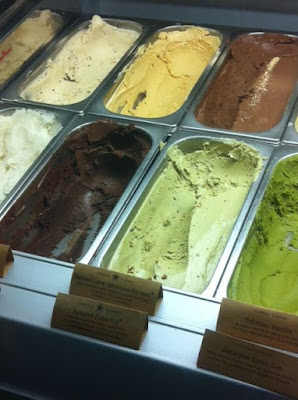 I think the cream cheese added (according to the sign) might have played an important role in accentuating the pistachio flavour. This is a combination I’ll explore when I have the time (pistachio cream cheese cupcakes maybe?).

Another flavour that impressed was the Earl Grey Lavender. As I mentioned before, lavender and stout are two flavours that I’m interested in this year and I’m happy to report that Creamier showcased the floral notes of the Lavender beautifully, offsetting it with the smokey, roasted flavour of the Earl Grey.

Also tried their Sea Salt Gula Melaka which wasn’t too interesting to me. Still, the texture of the ice cream was consistently silky smooth.

Creamier’s waffles were yummy too. Crusty on the outside with airy buttery insides. I still prefer Liege waffles (sugary crusts are the best) but for a normal waffle, Creamier does a very good version of it.

Everything cost us $13.50, which is inclusive of a 25% discount due to the rainy weather. Creamier is located in a ulu hdb estate so don’t panic if you see that most of the shops are closed.