Just finished 1 paper and gosh was it depressing. I’m usually affected but not to the extent of being demoralised. It was really disappointing and horrible to hand over mediocre work that makes up for 70% of my grade.

So what better way to drown those sorrows than to binge on some cake and write about it? Haha.

Cedele seems to have fallen off the blogsphere possibly because of all the excitement over new independent bakeries/ cafes (myself included). Then again everyone seems to have blogged about them before in the past so maybe that’s why. Despite having a chain of stores around the island, I haven’t been disappointed by their quality except maybe in the store at Utown. I usually pop by the one closest to home which is at jelita in Cold storage for my fix and when I was there all the cases were stocked to the brim! Even the whole cakes were all there unsliced (psychological or not, I prefer asking for a slice from whole cakes because I feel they are less dried out) and I spotted a couple I had never encountered before. 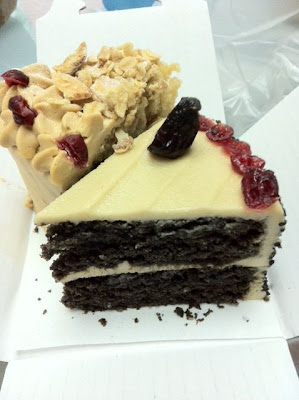 The sesame tahini was a very beautiful charcoal black cake. I love it. No it’s not coloring or anything (please refer to cedele’s ten commandments), it’s because of the black sesame paste that went into it.  Taste-wise the chiffon does get a bit dry but I hesitate to say this because it’s really just toeing the line- my line more like it. The white sesame tahini tasted like a less heaty version of peanut butter. Heavy so i’m glad they didn’t give us such a thick frosting (I would hate to let anything go to waste) but bursting with nutty flavour. I wouldn’t mind if they actually encrusted the whole cake with black sesame haha- it’ll look pretty cool no? The seeds were lovely, accented the nutty flavour and provided a slight textural contrast to everything else. This cake is hardly sweet by the way so it’ll suit those with a very low sugar tolerance. The frosting isn’t very sweet either. 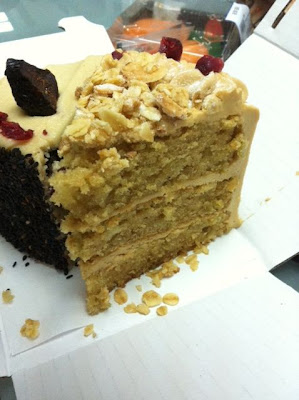 While I was actually more excited about trying the sesame tahini, this apple caramello turned out to be my favourite of the two. If only they had more of that caramelised granola! Overall this is sweeter than the sesame tahini but if my memory does not serve me wrong, still less sweet than their carrot cake. Perhaps it’s because of the salty caramel cream cheese frosting. The salt and caramel are more of supporting ingredients for the cream cheese but I’m not complaining (not a fan of salty caramel). Cedele shines in the cream cheese department (think carrot cake) so obviously their cream cheese frosting here was everything it should be- thick, smooth, slightly tart. The cake itself was moist and crumbly. Almost like their carrot cake sans the carrots, less spices and loads of shredded green apples.

Cedele’s sliced cakes are heavy (the lightest I can think of would be their blueberry maple). Best for an empty stomach and it should be accompanied with some good tea.

A lighter tea time snack would be their raspberry almond scone. Their other scones look puny and pretty dry so I guess dad decided to pick this more substantial looking one which I decided to help myself to (thanks dad! If you are reading this ;)). 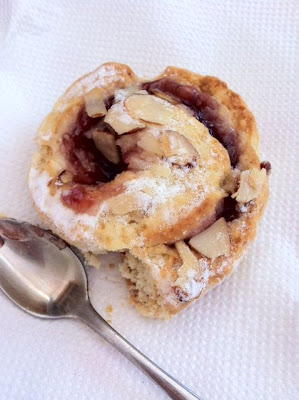 Eating scones is a messy affair with all the slicing and spreading but they have kept it neat by rolling everything into one package. Nothing too spectacular but enough to curb the craving.

Writing can be so therapeutic at times. I’ve never said this before but (assuming you didn’t skip the above paragraphs)thanks for reading 😉