This hawker centre is pretty special to us cuz my grandparents raised the entire family in one of the shophouses just down the lane. The shophouse is still there and gosh, I can’t believe I still remember playing there. It’s now an office space, but back then it was where the cousins and I would fool around with our paper aeroplanes. I remember the open-aired kitchen where my grandma would cook and my job was to swat all the houseflies that landed on the table hehe. Oh and I took the liberty of littering the electrical box downstairs with my butterfly stickers!

Anyway back to the topic. While some food centres boast one or two famous tenants, Amoy Food Centre has quite a couple. There is the famous Fried Kway Teow on the first floor (my grandma still recognises the old guy that fries the kway teow so yes he’s quite old and has been here for a looooong time), Yuan Chun Famous Lor Mee on the second floor which doles out delicious lor mee, Hoo Kee Rice Dumplings on the first floor (my dad and grandma both swear by their bak zhang!) etc. But that day we went for the famous fish soup/ porridge (by default u pay for a bowl of rice which is supposed to be dunked into the soup hence ‘porridge’) from Pao Ji (second floor). Given a choice I would have gone for Pomfret fish soup ($10) but it was sold out (thanks to the office crowd) so we went for the normal fish soup ($7). Delicious as usual with soup that’s unbelievably sweet and the fish slices were super fresh. The deep-fried lard garnish does help to up the flavour of course 😉 Yes there’s msg but it’s not very strong. They now restrict the amount of chilli-ginger dip each person gets- only one per order. I’m not a fan cuz I don’t like ginger but dad tells me this dip does have its followers! 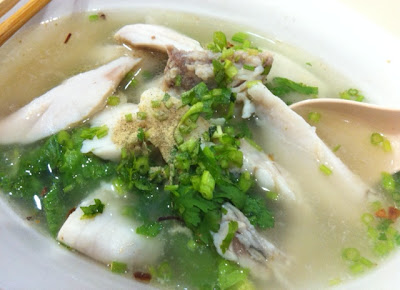 If $7 is hard to swallow (though I must add they are really generous with the fish!)  there’s also another fish soup stall called han kee which sells $4 per bowl but I can’t vouch for their quality. Never tried them before, maybe next time!

Ended off with a bowl of tang yuan from Zhen Jie Dessert Ah Balling (second floor). the default is 2 sesame and two peanut but they offer other flavours too. Not the thinnest of skins but it was well cooked (no undercooked bits) and they were soft too. 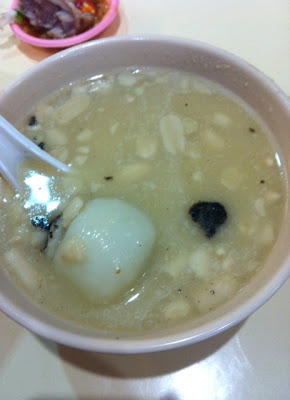 All in all, we were extremely satisfied as usual~