Food in Korea ain’t cheap compared to what we can get back here. A simple stew with rice, and banchan would set you back by at least 5-7 SGD. This explains to a certain extent why street food is so popular. It’s cheaper, and still fills the tum in the midst of hardcore shopping! 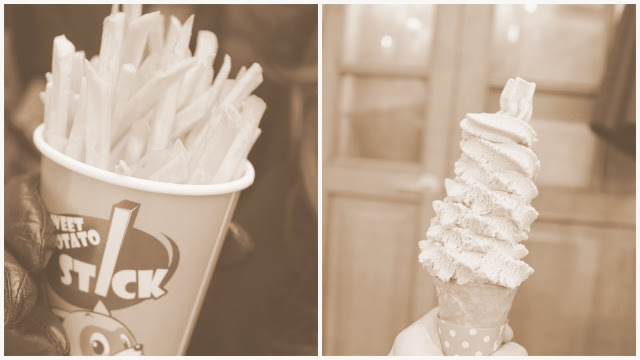 Street food is not limited to shopping time of course. Both Lotte World and Everland have food stands littered all over to curb any hunger pangs that you might have. Sweet potato sticks were really crunchy, and mildly sweet. But I would rather have the chicken kebabs drenched in the same thick spicy sauce as Ddeokggochi (Korean spicy rice cakes) over this any day. Please have a soft serve cone as well, trust me they taste even better on a cold winter day. 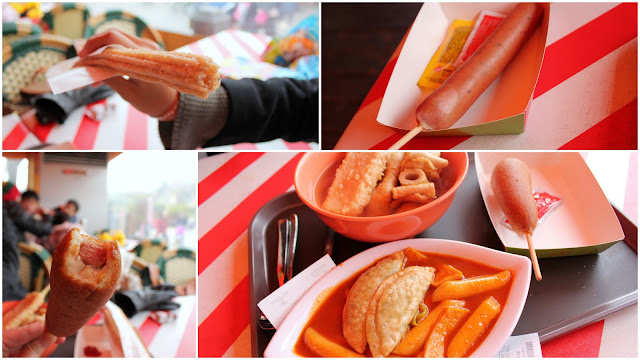 At Everland we had snacks for lunch (something that the parents will never allow!). The churros covered in a layer of cinnamon sugar were to-die-for. Served hot, this spanish donut had a crisp outer layer that gave way to chewy insides. The german sausage was nothing special but the corn dog was delicious. Fine, it’s not exactly korean (it’s american) but in everland they deep-fried the cornmeal batter perfectly, leaving zero traces of oil. It was very fragrant and the crisp outer layer was so more-ish! Ddeokggochi 떡볶이(korean spicy rice cakes)were very soft and chewy, and the sauce was thick and not too spicy. The rice cakes were thicker than the variations I’ve had in Singapore, and way softer too. This is definitely one of my favourite street snacks!

The Kkochi eomuk(꼬치 어묵) isn’t very different from our local yong tau foo. The broad piece of rectangular fishcake is skewered and served in a piping hot bowl of soup. Another great choice for a cold day. 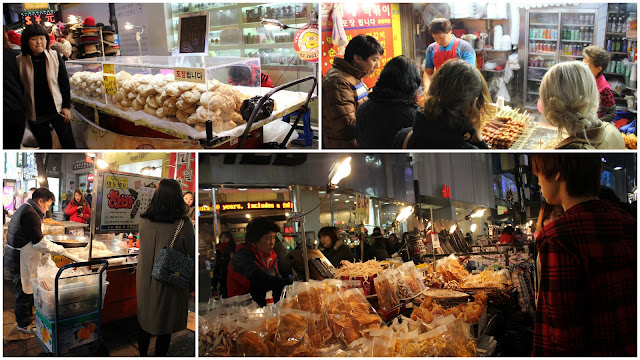 Myongdong fashion street is like a street food paradise. In fact, you can find everything here. Skip the large departmental stores and venture to the streets where you’ll discover some pretty good bargains and delicious grub enticing you at every corner. 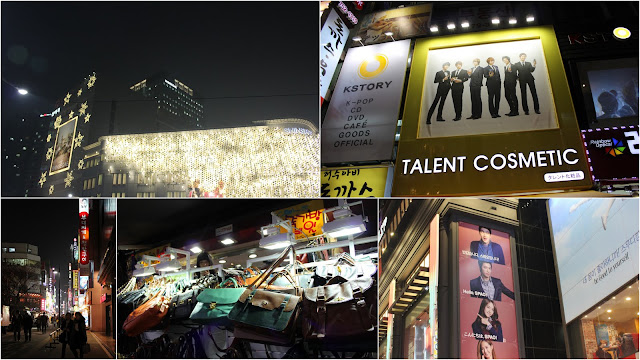 Clockwise from top left: Shinsegae (신세계), a South Korean departmental store; almost everything is endorsed by some k-pop star; bags going for 10000 won, or 11.70SGD; one of the many streets in Myongdong

Oh and if you are a k-pop fan, there are lots of shops selling k-pop merchandise around that area. Got a turquoise diary released by SHINEE for my cousin and she can’t stop raving about it. 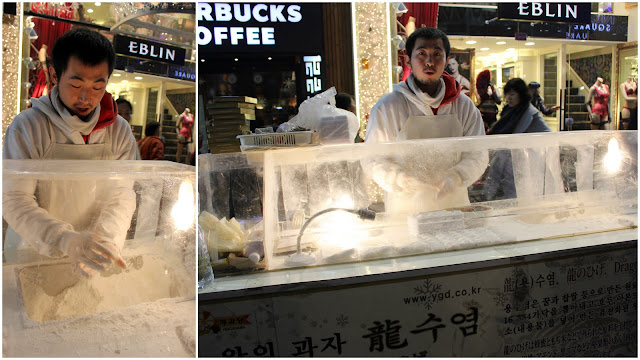 Kkultarae (꿀타래) or Korean court cake is made of fine white strands of honey and maltose, then wrapped around a sweet filling of nuts like walnuts, sesame etc. It’s the same as what we call dragon’s beard candy. We spotted a stand which makes this onsite. The owner was really friendly. After figuring out that we weren’t korean, he started making a fresh batch of candy for us to see. He deftly pulled the thick maltose and honey mixture over and over again still he achieved fine strands of candy. Everything was done in less than a minute! Impressed, we each bought a box for our parents. Seeing that we didn’t have a chance to try it, he gave us one each 😀

The freshly made ones were quite soft, and the nutty filling was delicious. After refrigeration, the white strands achieved a crunchier texture. The family liked it a lot, saying that it wasn’t too sweet.