Heading down to Brunetti after class was totally at whim. In fact, it does seem like we have been going on too many dessert escapades after class. *ahem* 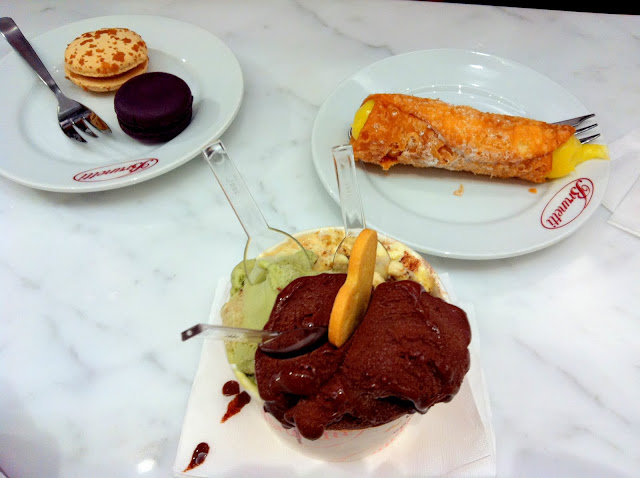 It was opening day, and the Italian cafe with its origins in Melbourne, was at full-swing. The glass cabinets were packed with desserts, from macarons to rustic-looking italian cakes (i.e. nothing like french precision, but still looking delectable nonetheless), and tubs of gelato.

Unfortunately when it came to recommendations for gelato, the guy was tongue-tied simply because he never tried any before. I think it’s quite important to let your staff understand the food before selling them especially during opening day when none of the customers have tried your food before. Oh well, high expectations on my part.

That aside, the gelato was nothing short of delicious. We ordered a huge cup with three flavours- pistachio, tiramisu, and dark chocolate. I’ve yet to try Tom’s pistachio (because it is never ever selling on the day I’m there!) but Brunetti’s version certainly knocked my socks off. It was packed with nutty flavours, and the pistachio aftertaste was oh-so- pleasant. I also enjoyed the texture of the gelato which was smooth and dense. Tiramisu could have done better flavour-wise but it paired really well with the dark chocolate which was very rich and bitter.

Another thing I recommend is their cannoli. All in all, it was a traditional Sicilian delight done well. The pastry shell cracked beautifully under the fork and the viscous, eggy custard was done to the right consistency. While the friends found the custard a little sweet, I liked it just the way it was. Hmm.. maybe you should trust their opinion over mine on this bit. 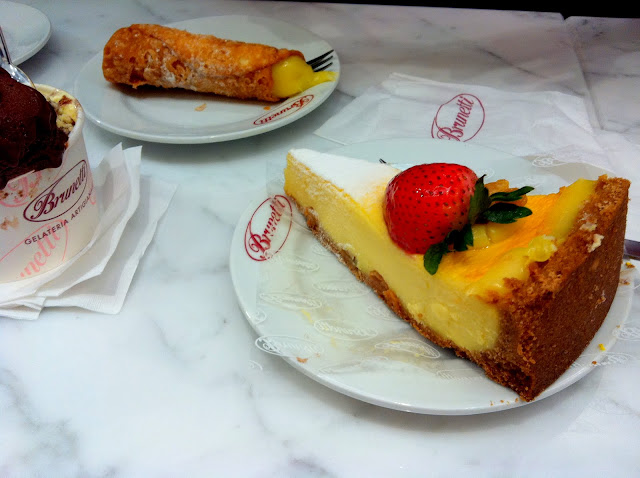 Cakes on the other hand, didn’t fare so well. I didn’t try the rum cheesecake, but those who did commented the rum was too faint. In short, nothing fantastic despite it’s enticing colors and size. Apparently the Millefoglie tasted weird, but I didn’t try that either so don’t quote me on that.

As for the macarons, i tried blackcurrant, passionfruit, and hazelnut. Consistency was severely lacking quality-wise, because despite only trying only three, all of them turned out to be very different. The blackcurrant was the best- thin, crisp shell that was nicely aged so much so the insides were moist but still a little chewy. It was also my favourite flavour, think a stronger version of ribena pastilles. Passionfruit was a little overaged but still all right for me I guess. The hazelnut one on the other hand, was an utter disappointment. It was crispy which is quite phenomenal in my opinion because till then, I had never tasted a crispy macaron which managed to develop pretty feet at the same time. Overbaked probably, though I managed to convince myself to finish it since I shelled out so much $$. Word of advice, ET still has the best consistency quality-wise so if you want to avoid embarrassment, buy from them!

Would I return? If I’m in the vicinity of Tanglin Mall, yes. It has a lovely casual vibe to it, and the white marbled tabletops and adorable metal tins containing paper napkins evoked many memories of Italy. Whether you are there with friends catching up over some coffee and dessert, or alone resting your tired feet after shopping, I’m sure you will enjoy your experience there.