Personally I find the facade of Iluma quite ugly, especially at night when the glowing lights are switched on. The inside however, is really spacious. I went there with the friend awhile back with the purpose of visiting their Ramen “Stadium”. Having been to one in Fukuoka, I was pretty excited that we now have one right here in Singapore!

Ramen Champion in Iluma has 6 stalls currently: Bario, Tetsu, and Taishoken from Tokyo, Iroha from Toyama, Gantetsu from Sapporo and Ikkosha from Hakata. Having tried Ramen from Tokyo and Hakata before, I decided to go for Iroha’s Toyama Black Ramen. 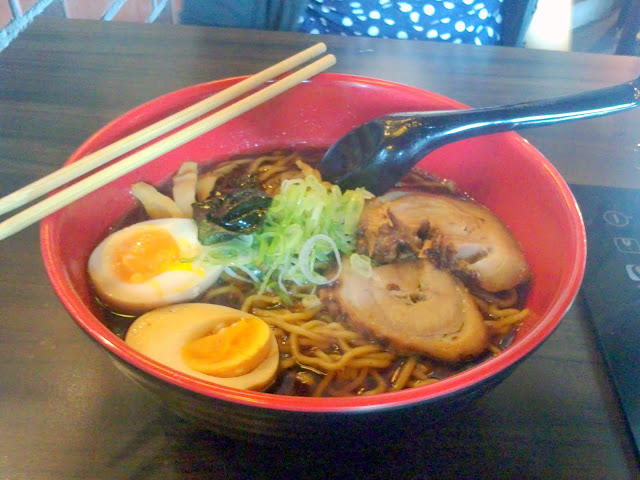 The kuro shoyu soup had a distinctive smoky flavour due to the black soybeans that also contribute to the soup’s pitch black color. The broth wasn’t too heavy on salt, which is a problem I have with most chains that hail from Japan. The char shu had thick rinds of fat which were surprisingly melt-in-the-mouth instead of being gelatinous. In fact the char shu kept falling apart when I tried to pick it up with my chopsticks- it was so tender! The noodles had a great bite to it, and slurping it up with the soup made it all the more tastier.

The only fault would be the hanjuku egg because my yolk was half-overcooked. That said, this has gotta be one of the best ramen I’ve had to date, and I would certainly return for another bowl.

I personally found the soup base of the friend’s Bario Ramen on the salty side, though not unbearable. I didn’t get to try the noodles but they were a thick flat variety that I never saw before. The thick chunks of char shu were extremely tender and flavourful, according to the friend. For the record he did enjoy his ramen, and the garlicky broth though he felt pretty bloated after that, especially since he had a curry puff whilst waiting for me to arrive. Judging by the queues at Bario, I think lots of people appreciate the quantity of ramen given.

In short, visiting Ramen Champion in Iluma is a must. You might even catch some of the master chefs (we saw the owner of Bario) in action!