I bought ready-made puff pastry that didn’t require rolling out- just thaw and use. 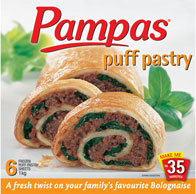 Pampas Puff Pastry sold in Phoon Huat is cheaper ($6.20 I think) as compared to another brand I bought from NTUC, and they tasted just as good. There are six sheets inside and each sheet makes 4 puffs the size of macdonald’s apple pies. 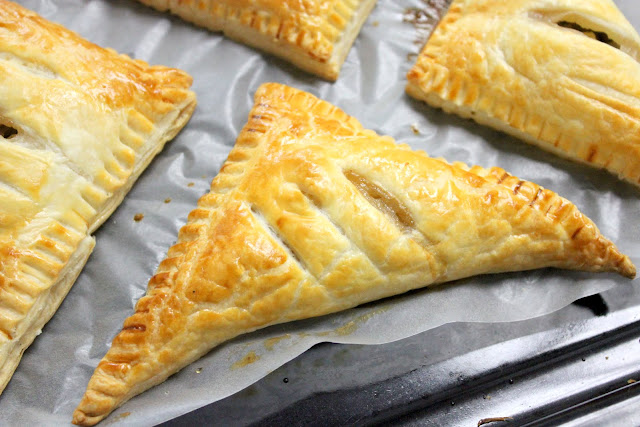 We used the recipe below for the chicken filling in our chicken puffs and they turned out really awesome! We reckon it’ll go well with rice too 😀

50 gm mixed frozen vegetable (or more if you like)

Sliced fresh mushrooms(amt up to you)

Heat abt 2 tbsp of oil and fry potatoes with abt 4 fl oz of water and 1/2 tsp salt until soft. Set aside. In a clean wok, heat 2 tbsp oil. Fry the onion until transparent. Brown the diced garlic. Add mixed vegetable, mushroom, chicken. Fry for a while to break up chicken. Add in potatoes. Add in abt 4 fl oz of water and cook for abt 5 mins. Add in salt, sugar and pepper. Add in the cornstarch and stir to thicken mixture. Set aside for later use. 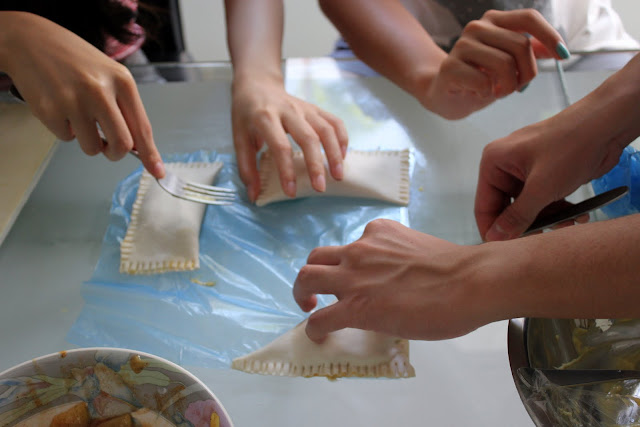 Slice a square puff pastry sheet into four. To make triangular puffs, simply spoon some filling onto the small square and halve it into a triangle. Seal the sides tightly with the back of a fork and cut 4 deep slits on the surface. Brush the top generously with beaten egg wash.

Please don’t stuff the puff with too much filling because the puff will explode later! For the same reason, cut the slits nice and deep for the hot air to flow out when the puff is baking. To get an even golden brown top, don’t hesitate with the egg wash.

A few days later I also made Apple Custard Puffs and Apple Strudel with a few friends. Both were delicious, especially when paired with Dreyer’s Vanilla Ice-cream.

Source: Cooking Up A Dream 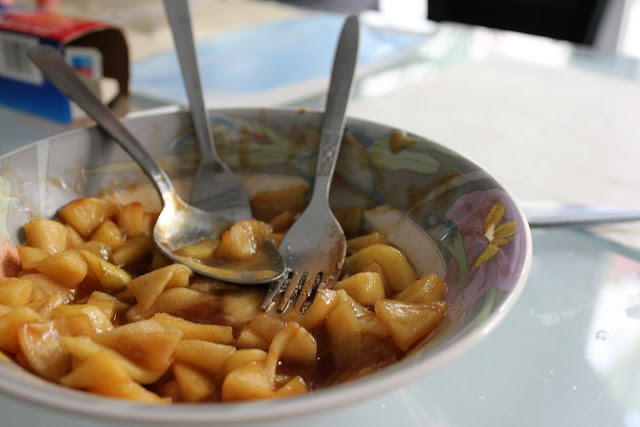 Slice the apples in thin wedges or cubes to your preference
Heat a saucepan over medium heat. When hot, add in the butter and let it melt. Add in the apples and stir such that all the apples are coated with the butter. Allow the apples to be cooked thoroughly , this will take about – 10 minutes. Stir the apples occasionally to prevent burning.
Meanwhile, mix the corn flour, lemon juice and zest in a small bowl and save for use later.
Once the apples are cooked, stir in the sugar and continue stirring till all the sugar has melted.
Add in the raisins and cinnamon and continue stirring for a few minutes.
Add in the corn flour and juice mixture and stir. Allow the sauce to thicken and remove from heat. Allow the apple filling to cool.

2 egg yolks
1/3 cup + 1/2 tbsp castor sugar
2 tbsp plain flour
1 cup milk or 1/2 cup milk+ 1/2 cup heavy cream
1/2 vanilla bean pod or 1/2 teasp vanilla
1 tbsp melted butter
Mix the egg yolks and sugar in a pot till it becomes creamy
Sift in the flour and mix well. Warm milk in a saucepan
Add warm milk into the yolk-sugar-flour mixture slowly and mix well.
Now place the pot on low heat and stir the mixture constantly. Add in vanilla and continue stirring until it thickens. (Note: if lumps appear at this stage put it over a sieve to get them out. The trick to not cooking the eggs is to take the mixture off the heat when you feel that it’s getting too hot)
Remove the pot from the heat and stir in the melted butter.
Cool the custard cream in the refrigerator to let it thicken somemore. 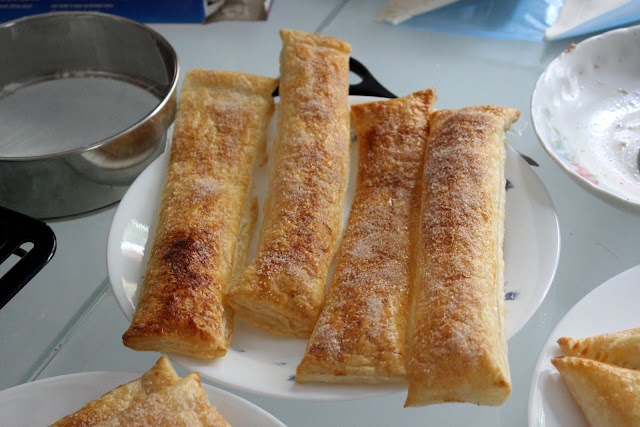 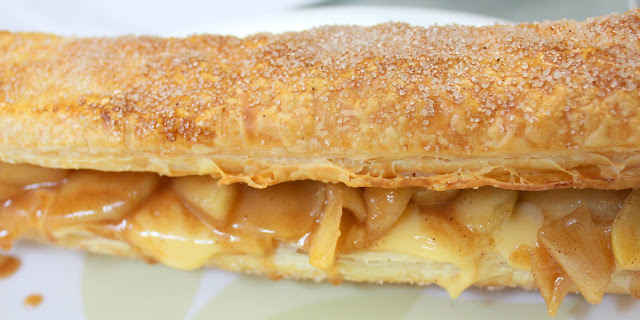 We used the same custard and apple recipes to make the custard apple puff. 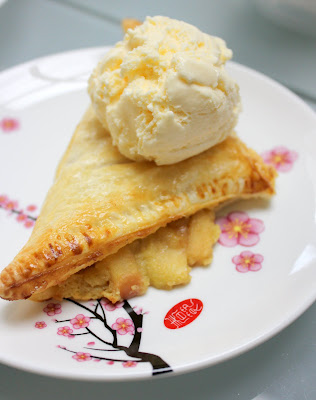 The best thing about puff pastry is you can leave it frozen in the fridge and use it at your own convenience. The buttery and flakey layers go with just about anything, from sweet to savoury.