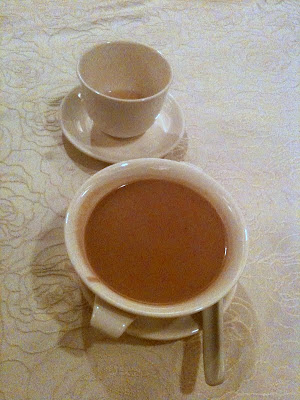 I must say dim sum here is not the cheapest, but that’s probably because so many things are made in-house. Take this walnut cream for instance. Our waitress told us the walnuts are painstakingly ground by the chefs to produce this smooth and silky delight with strong nutty accents. Then there were the BBQ pork buns which really melted our hearts with that butter-sugar topping, and the beautifully caramelized strips of pork inside which spill out when you break the bun into half. The parents enjoyed the century egg porridge, praising the kitchen for achieving that level of richness (those with cholesterol issues might want to avoid this?) in every spoonful.

For those who like things old-school you’ll be pleased to see the smiley waitress push a dimsum cart right to your table-side offering their signature egg tarts and other fried foods. Make your selections quickly because some stuff are quite high in demand 😉

Our most expensive dish was lobster ($80, but the cost depends on its weight. We took the lightest available that afternoon). We had it served au naturel with just a simple sauce containing, amongst other things, chinese wine and egg whites. The bouncy flesh bore testament to its freshness and the sauce was so incredibly light and refreshing that we finished every drop.